Interestingly enough, all GPS trackers that you find on the market today are very similar.  Even though they may look different, or may be priced very different, they all have the same basic principal. 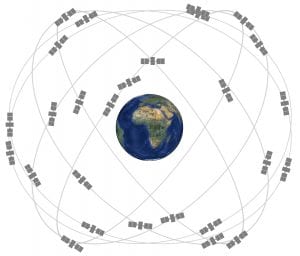 The GPS system consistently delivers high performance and high accuracy position and timing information, thanks to the hard work of the men and women of the US Air Force’s 2nd Space Operations Squadron and the Air Force Reserve’s 19th Space Operations Squadron.  Together, these highly skilled members keep the GPS satellites flying 24/7 with high availability and high accuracy for both citizens and military users alike.

Each GPS tracker contains a very sensitive GPS receiver.  By using trilateration, the GPS receiver is able to determine the position in space and time.  Each GPS satellite continuously transmits precise timing information that can be used to calculate the distance from the GPS tracker to the GPS satellite.  Knowing that the information is transmitted at the speed of light, one can calculate the distance (ignoring relativistic differences for simplicity).  After the distance is calculated from 4 or more satellites, the receiver is able to determine its position.

This position information is then stored in a database, and made available to the end user via a secured channel.  Data is generally retained in the database for several months to a year depending on the tracking provider.

Hopefully this helps clarify some of the mysteries involved with GPS trackers.